I’m still in the process of assembling something like All the News of All the Things that have happened over the first two weeks of this month, and fully intend for those to go up starting Monday — but this morning, all I want is to flail incoherently over this series of books that I love. 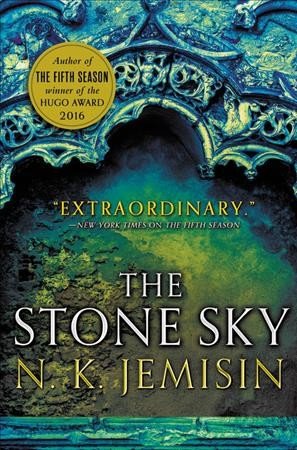 I am used to fantasy and science fiction — in novels, in films, in comic books — setting up apocalypse as threat, cataclysmic change as something to be prevented at all cost. Villains are, by and large, those who want to change the world, while heroes are the ones who preserve the status quo, who keep it intact. The unquestionable premise of this kind of setup is that the world is precious and worth saving.

The Stone Sky rejects this out of hand. If the Broken Earth trilogy as a whole shows a world where cataclysm and upheaval is the norm, The Stone Sky interrogates what right worlds built on oppression and genocide have to exist.

The difficulty of reviewing the third book in a trilogy is that you need to make it intelligible to people who haven’t read any of the previous instalments while also finding room to say what’s amazing about the book while also placing it in the context of a completed whole. It doesn’t leave a whole lot of room for the kind of deep delving I want to do with this series, with this volume, with the character of Essun, with the world she inhabits, with the description of the Thniess, with climate change, with unsustainability. There is so much.

These books are magnificent, so I hope you’ll read them, and then come talk to me about them.

In other Jemisin news, it looks like The Fifth Season is being developed for television and her next series will “mess with the Lovecraft legacy.” I’m so delighted to see her going from strength to strength.