Two years ago, the area in which I live saw a lot of flooding. My family’s home is behind the 100-year flood line, and we were very, very lucky — with a lot of help from family and friends, a lot of sandbagging, the house withstood the river’s rising, and the water receded quickly once it peaked.

Now it’s happening again, worse. More communities are affected; the water’s expected to rise higher, faster, and to stay at that height for weeks, not days. 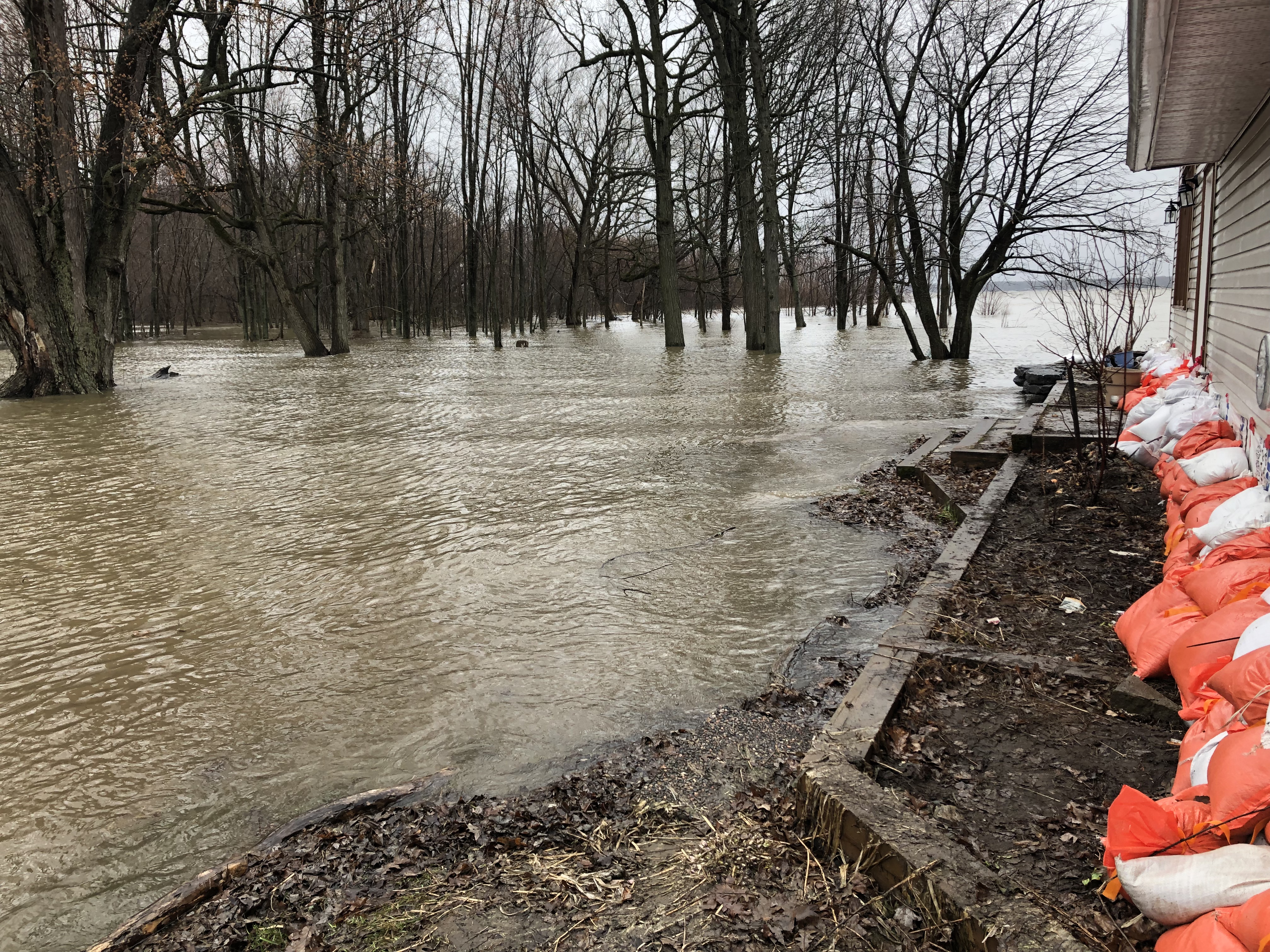 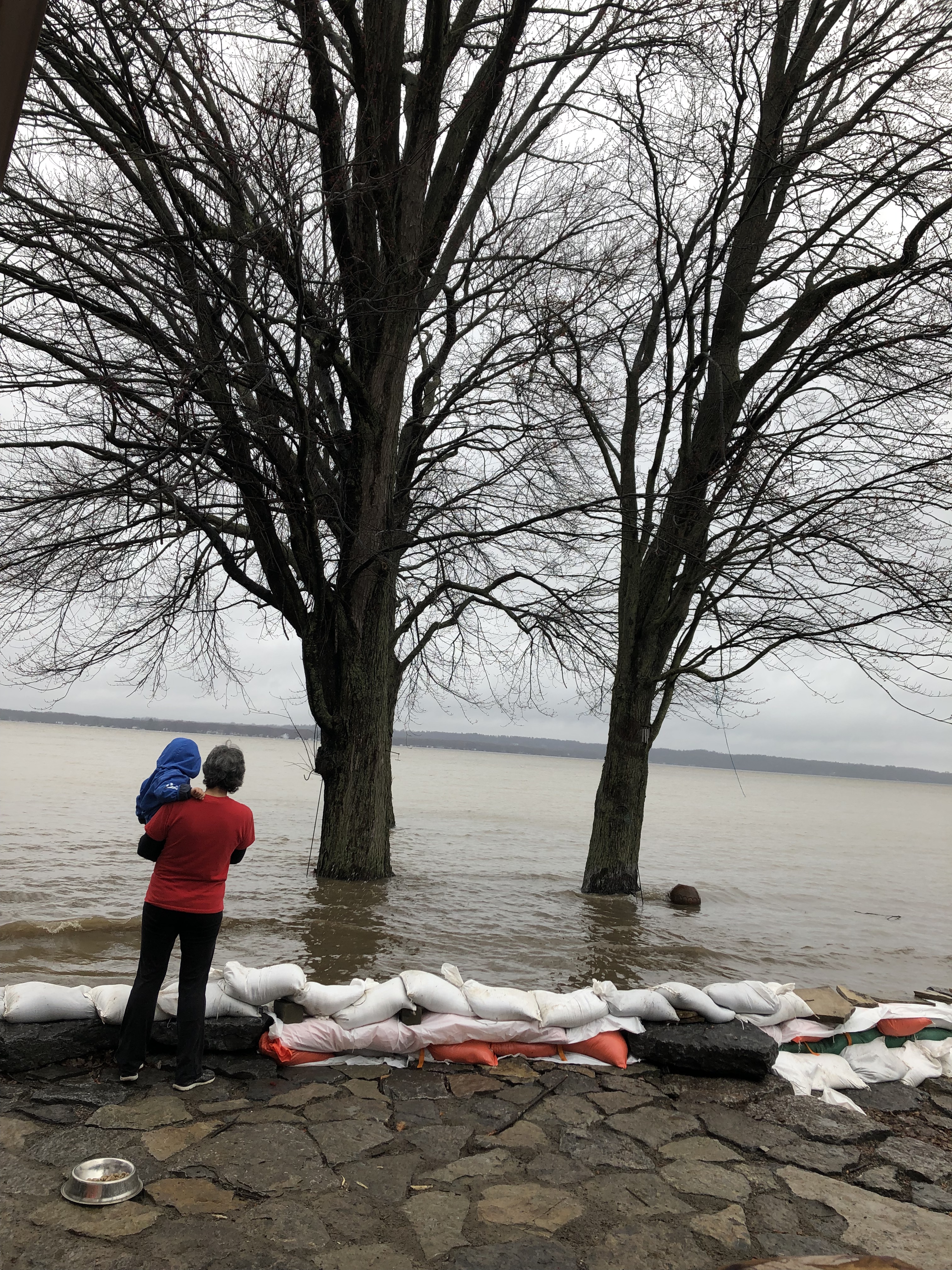 We’ve done more this year in preparation. There’s Tyvek-covered plywood against the windows in case the river rises up to them and brings debris down on them. There are… about 500 sandbags? My fingertips are still numb from the tying and lifting and hauling of them, and the less said of the rest of my body’s soreness the better. 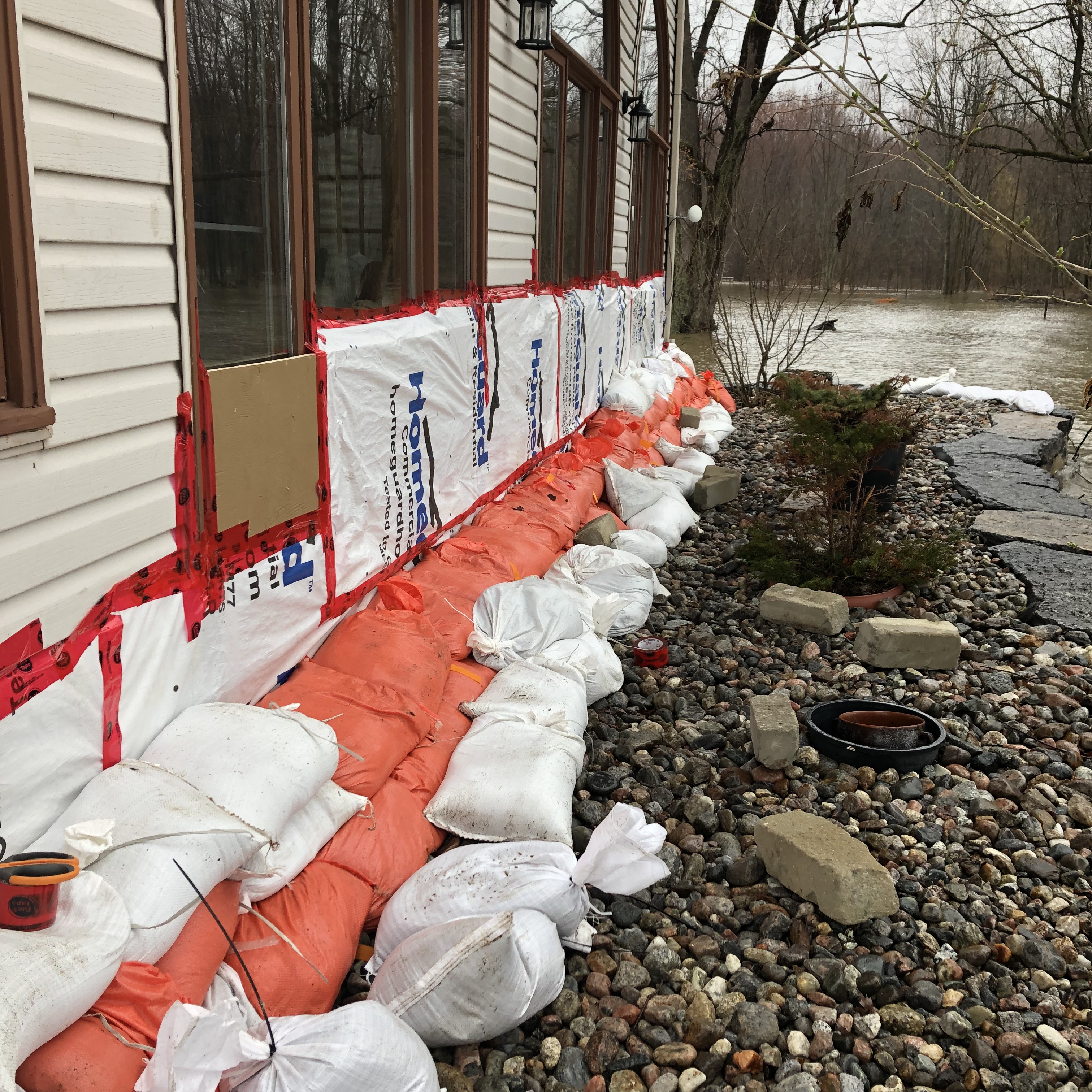 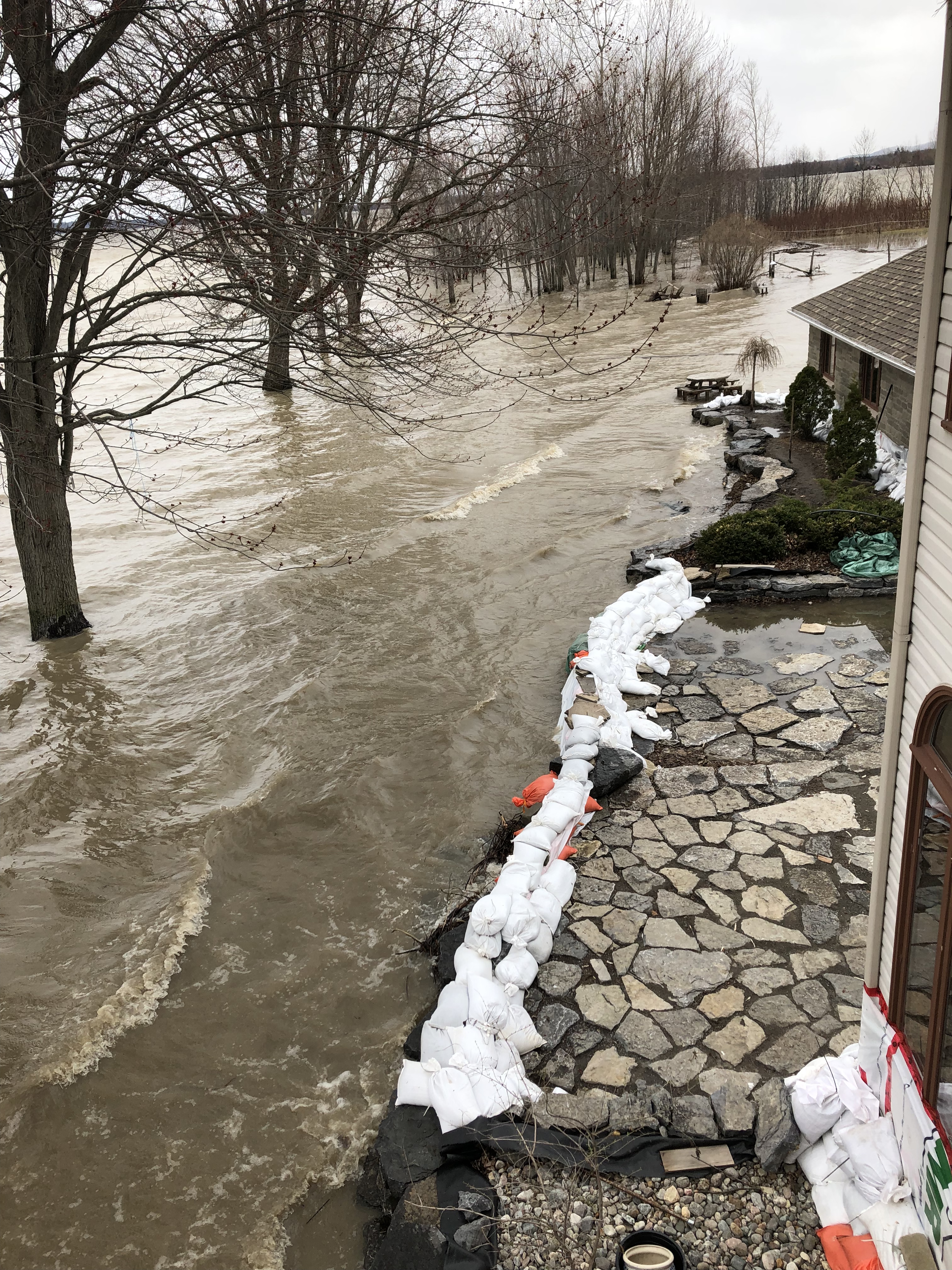 My sister and I arrived around 4:00 PM yesterday, got started with a crew around 5:00, and then didn’t stop (except for frequent breaks in 5-10 minute increments) until about 1:00 AM. And all the while the river pursued its own relentless work: the height of the waves, the speed of them, the rush and roar of them, water spreading in tongues and fingers towards us like hunger, like anger.

We’ve done all we could, and there’s comfort in that. My body couldn’t do more. The rest is the river, which I wish would, in fact, rest. I want to sing to it all the songs of drowning I know, all the songs of flooding and loss in a kind of kinship, a reverse alchemy; I want to tell it, with all the sincerity of my numb and bruising heart, calm your waves and slow the churn / And you may have my precious bones on my return. 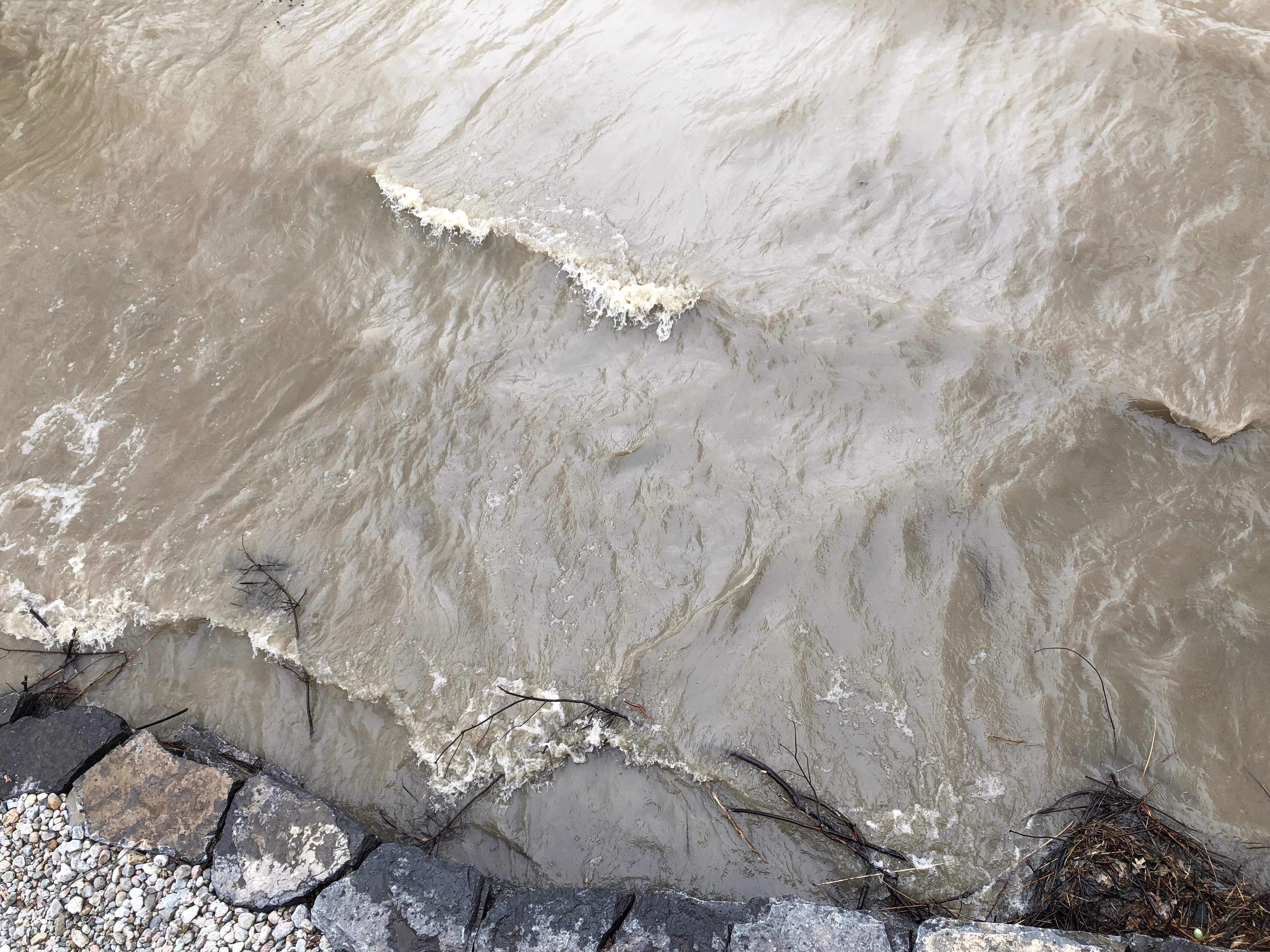 The wind is a wilderness in the tree branches; the house feels like an anchored ship, with squirrels on the mast instead of seabirds. (Squirrels can swim, it turns out! And thank goodness–my heart was in my mouth as I watched one jump into the water before clambering up a trunk.)

My nephew, all of three years old, has been watching all this with equanimity. He kept our morale up well into the night through sheer obliviousness, playing with his grand-mother and watching the waves dashing against the sandbags with a “one … two … splash!”, delighting in what might very well destroy the house we’re in. But so are we all, to some extent; the absolute helplessness of this, watching and listening to the water, and loving it in spite of all. One lives near the water because one loves it; one can’t love it less as it surrounds and breaks and flexes its strength. One can only love it from different places, with more awe and trembling, more surrender, more pain.

There’s so much more to say — about politics, about climate change, about the despicable intersection of those things — but I haven’t the energy for it. The river washes everything out. To everyone in Constance Bay, in Pontiac, in Gatineau, in every affected community — all my heartfelt best wishes and solidarity. To everyone not affected — if you have the time and wherewithal to volunteer somewhere and fill sandbags, you can’t begin to know how appreciated that is. Constance Bay has, I hear, the army and the Red Cross; in Pontiac, this morning, there was a single person at city hall working to fill bags.

Effort and energy ebb and flow like the waves we’re trying to keep at bay. But time is short, weather’s chancy, and every little bit helps — not only in practical terms, but in feeling, in support. We’re all shoring up our hearts as well as our foundations.

Letter of News: Columns and Keynotes