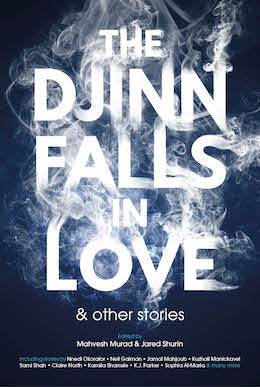 I just read this review of the anthology by Liz Bourke on Tor.com, and it’s made me even more excited to read the whole, to see how my (genuinely very small) contribution fits in with Jared Shurin and Mahvesh Murad’s project. What delights me most is how global this anthology is — how I can look forward to something that will definitely not be tired rehashings of ideas about djinn, something that will introduce me to new writers, new imaginative dialects.

My story, “A Tale of Ash in Seven Birds,” was written last summer, in a bubbling over of fury and misery over the state of a world which has, in large part, only gotten worse since then. It’s a fable about migration, and borders, and nations, with a core of magicians’ battle that I first encountered when I was little and reading The Arabian Nights. It’s definitely written from the same emotional place as “Anabasis,” that appeared on Tor.com yesterday in the context of the Nevertheless, She Persisted project.

It’s funny to me that being as allergic to body-swap narratives as I am, shape-shifting is at the heart of the last several stories I’ve written, and is a major concern in the novel I’m writing. I think I’m circling the difference, though: I hate stories where we’re aware of the lie, where shape-shifting or cloning or body doubling is a means of stealing identity, lying to loved ones, violating trust — maybe partly because I feel like shape-shifting, code-switching, flexibility and malleability are survival tools that deserve better than to be reduced to facades. To change and be changed is something viscerally intimate to me.

Something to think about, anyway. Meanwhile, here are handy links to where you can obtain The Djinn Falls in Love, which I hope you’ll do!