If you’re trying to raise your STEALTH stat, you could do worse than study award nomination deadlines, as they successfully sneak attack me multiple times a year.

The Hugos! From the ballot guidelines:

Here, in a haphazard, slipshod way, are some suggestions for things I think deserve to be on the ballot, with a focus on people and stuff that I don’t see talked about a lot (though of course I’ve been off social media for a couple of weeks and maybe everyone’s talking about this stuff, who knows!)

Whether or not you consider any of these for your ballot, I hope you’ll explore the works and people behind them, as they’re all super great and this post took me way longer to write than I expected it to. It’s WILDLY incomplete, but I can’t spare the time to be rigorous, so I’ve tried to focus on the categories I feel don’t get a ton of attention or diversity year on year.

Storyological, by Chris Kammerud and E. G. Cosh. Two smart, utterly charming writers talk to each other for 20 minutes about two short stories. I love this podcast completely — if I haven’t read the stories, I want to seek them out, and if I have, I feel like I’m part of a great conversation. Always positive, often quirky, the hosts are fabulous readers, zooming in on their favourite bits and discussing why they love them with sharp, tender insight. Also they laugh together a lot, which makes me happy.

Midnight in Karachi, by Mahvesh Murad. Mahvesh interviews writers and is great at it! I love listening to these conversations.

Unjustly Maligned, by Antony Johnston. Antony invites people to come on his show and defend a thing they love that most people don’t love. I was recently on this (defending the V for Vendetta movie) and in order to prepare for it I listened to some episodes, and it’s just brilliant — a great concept led by a wonderful host that always results in great chat.

House to Astonish, by Al Kennedy and Paul O’Brien. The best comics podcast. You can quote me on that.

Can we please give Likhain a Hugo already? Her work undoes me and remakes me and I just want to live in her use of colour. I’m nominating her in both categories because rules are confusing and I think she’s eligible in both but also come on. LOOK AT THIS. 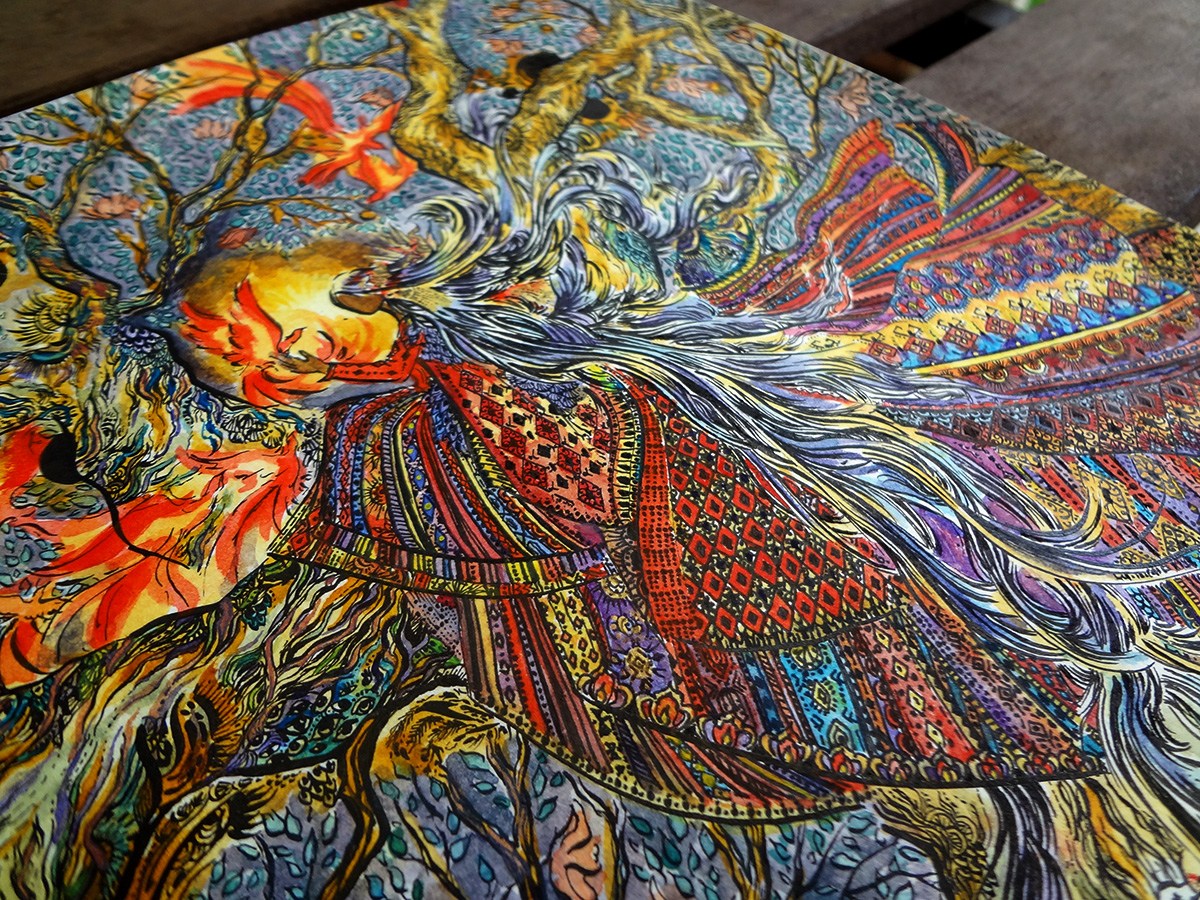 Rose Lemberg has a more thorough post about Likhain, which I encourage you to check out.

I’ve also super loved everything I’ve seen Glinda Chen do! I became aware of her work via her animation of parts of Max Gladstone’s books, but she’s done so much more. Do consider her!

This is a category that sees a lot of the same names year on year, and with good reason — Galen Dara and Julie Dillon keep putting out breathtaking work on the covers of books and pro magazines and they’re brilliant. But I’d really love to see Jeffrey Alan Love considered this year: his book Notes from the Shadowed City is stunning (and is also a Best Graphic Story pick for me), his cover for Cassandra Khaw’s Hammers on Bone likewise, and that’s just off the top of my head. His stuff just leaps out at me, and his technique for creating the textures in his work is so elegantly simple, watching it happen is like seeing someone perform a magic trick while explaining to you how it’s done without diminishing any of the wonder.

I wonder if I can come up with more to continue the Graphic City theme. Hmm.

I exist in perpetual awe of and gratitude for editors. The teams at Strange Horizons, Uncanny, Clarkesworld and Lightspeed all deserve your consideration, but I’d like to highlight some others whose work I think deserves serious praise.

Rose Lemberg‘s been a force for good in genre for years, always keen to showcase and support marginalised voices, especially queer people of colour. Rose is equal parts generous and fierce, and I admire them tremendously; I partly modeled Warda from “Pockets” on them. Their relentless advocacy humbles and inspires me. Last year saw the publication of An Alphabet of Embers, a small feast of unclassifiable jewels, which makes them eligible.

Mike Allen, likewise, is one of the hardest working editors I know, and certainly one I think deserves more recognition. He labours tirelessly on behalf of his authors, takes mentorship very seriously, and has been in the business of editing without being recognised for it since … At least 2005, when I think we started talking? But he’s only gotten better year on year. The Clockwork Phoenix anthologies are magnificent accomplishments, Mythic Delirium was one of the first genre zines I read regularly, and he’s basically superb.

With the publication of The Starlit Wood, Dominik Parisien‘s count of Stuff He Has Edited is officially 4, the minimum number required for consideration. He would never ever put himself forward and is one of my favourite people in the world entire, so I am here to shill for him. I don’t think I know anyone who loves editing the way Dominik does, for whom it’s both sacred calling and geekery: he’s staggeringly good at editing stories and at curating them. His sense of editorial narrative in a collection is superb, and I always look forward to anything he’s had a hand in. While The Starlit Wood, co-edited with Navah Wolfe, got the most press last year, his work on Clockwork Canada was wonderful and important, and definitely worth acknowledging.

This is another category that sees a lot of the same names year on year — I think partly because so much of what a long form editor does is invisible to a reading public. With magazines, you’ll usually have some kind of editorial note about content and curation; with novels, not so much.

I’d like to put Navah Wolfe on your radar.

As far as I’m concerned, Navah Wolfe is the Leslie Knope of publishing. I’ve only worked with her on short form stuff, but I’ve developed a keen appreciation for her editorial vision across multiple Saga Press novels, and I’ve had the privilege of glimpsing her process and how hard she works for her authors. She is literally half an imprint. Every novel she’s edited that I’ve read, I’ve loved. One of those novels, Borderline by Mishell Baker, is currently up for a Nebula Award, and its sequel Phantom Pains is even better.

Navah and I often share hotel rooms at cons but I’m not sure whether or not she actually sleeps? She’s fierce on her authors’ behalf and brilliant and funny and generous and kind and utterly devoted to her work. I would love to see that work recognized.

The only fiction of mine from last year that I’d like considered is “Seasons of Glass and Iron,” from The Starlit Wood anthology edited by Dominik Parisien and Navah Wolfe. I think it’s the best thing I wrote last year. Other than that, I’m on two podcasts which are eligible for Fancast: Down and Safe, a podcast about Blake’s 7 with L M Myles, Scott Lynch, and Michael D Thomas, and Walkthrough, in which Julia Rios, Layla Al-Bedawi and I discuss every episode of the game The Walk.

The Blessed Unrest of Women Talking