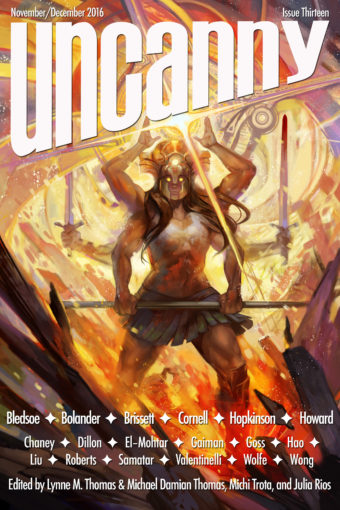 I’m back from the World Fantasy Convention, and have loads I want to say about it, but first — it’s a new month, so there’s new Uncanny!

Issue 13 is wholly available in ebook form, and the first half of it is live online today, including “Seasons of Glass and Iron,” my story in The Starlit Wood anthology. It’s a fairy tale mash-up written at the request of my niece (to whom the story is dedicated): she asked for a fairy tale, and I wanted to give her one that didn’t sour my tongue where girls and women were concerned. Obviously there are tons of those — but on a long stretch of country road between The Scottish Owl Centre and Glasgow, this is (mostly) what came out. So thanks are due to Lara and her keen, questioning eyes that made it impossible for me to countenance telling her a story where women don’t rescue each other.

Here’s a taste of it:

Tabitha walks, and thinks of shoes.

She has been thinking about shoes for a very long time: the length of three and a half pairs, to be precise, though it’s hard to reckon in iron. Easier to reckon how many pairs are left: of the seven she set out with, three remain, strapped securely against the outside of the pack she carries, weighing it down. The seasons won’t keep still, slip past her with the landscape, so she can’t say for certain whether a year of walking wears out a sole, but it seems about right. She always means to count the steps, starting with the next pair, but it’s easy to get distracted.

She thinks about shoes because she cannot move forward otherwise: each iron strap cuts, rubs, bruises, blisters, and her pain fuels their ability to cross rivers, mountains, airy breaches between cliffs. She must move forward, or the shoes will never be worn down. The shoes must be worn down.

It’s always hard to strap on a new pair.

Read the rest here — and if you enjoy it, consider picking up the anthology! I’m halfway through reading it myself, and it’s amazing, with stories that run the gamut from funny and whimsical to harrowing and fulfilling. I’m so honoured to be in it, and so happy that Uncanny has chosen to reprint it in this issue that is — so far as I have read — full of fierce love between women.

Max and Amal Go to the Movies