If you blinked at the title, well, I’ve been doing that for about a week. I wrote a review for the New York Times. It’s my first time doing so. Many thanks to Bo Bolander for securing me a print copy in actual New York! 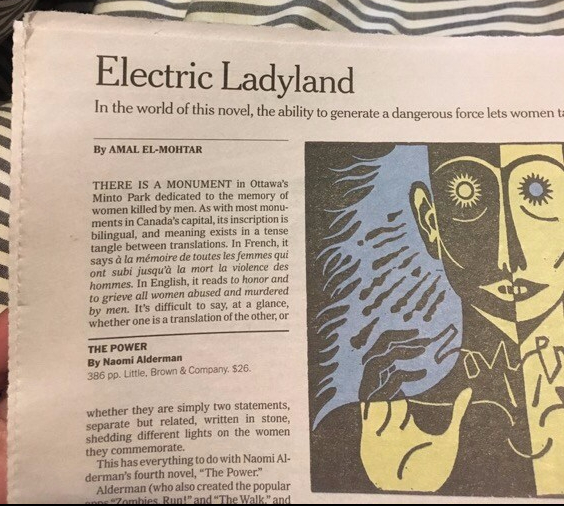 My name is in the New York Times. I reviewed an interesting book by talking about Ottawa and bilingualism. It hardly seems real, but it is, as they say, right there in black and white.

THERE IS A MONUMENT in Ottawa’s Minto Park dedicated to the memory of women killed by men. As with most monuments in Canada’s capital, its inscription is bilingual, and meaning exists in a tense tangle between translations. In French, it says à la mémoire de toutes les femmes qui ont subi jusqu’à la mort la violence des hommes. In English, it reads to honor and to grieve all women abused and murdered by men. It’s difficult to say, at a glance, whether one is a translation of the other, or whether they are simply two statements, separate but related, written in stone, shedding different lights on the women they commemorate.

This has everything to do with Naomi Alderman’s fourth novel, “The Power.”

I could have written a lot more, had not word-count been an issue. There’s so much to talk about here. I’ve been asked about whether it addresses trans issues at all; it doesn’t. I kept wondering if it would, but so far as I recall the only things to trouble a cis discourse (ciscourse?) are an acknowledgement of chromosomal variation and a statement that not all people with XX chromosomes have the power while a very small percentage of people with XY chromosomes do. Abigail Nussbaum has a longer review of the book on Strange Horizons, in which she adds the following, with which I agree:

It is, at this point, worth pointing out that one of the ways in which The Power fails to fully explore this premise is in its near-total silence on the subject of race. It’s never suggested, for example, that the new gender dynamics of the post-Power world are informed by preexisting racial tensions, though we would surely expect them to be. Neither do Tunde, a black African, or Allie, a biracial American, have very much to say about the role of race in their lives either pre- or post-Power. By the same token, though the book imagines that the lines along which the Power is distributed are not clear-cut—there are small numbers of women who don’t manifest the Power, and men who do—the existence of transgender and intersex people is completely ignored, as is homosexuality. These are all axes of power and oppression that play into Alderman’s central topic, and it’s unfortunate that they weren’t discussed.

Her whole review is well worth reading.

Meanwhile, I’m grateful that my first assignment for the NYT was reviewing such a chewy and thought-provoking book. Many thanks to everyone who’s read and shared the review; you make it harder and harder to forget that this is a real thing that happened.